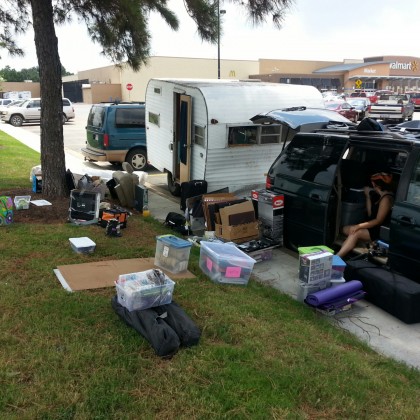 If anything can go wrong, it will… right?

We were scheduled to leave Houston on August 12th. Prior to that, we brought our vintage canned ham to a trailer shop to get the bearings looked at. After a week they had done no work, and claimed we told them not to work on the trailer. ok… bring it to a tire place to at least replace the tires. We managed with great effort to find a shop that could upgrade our minivan with a transmission cooler. We searched high and low for someone to help with the trailer axle, and got one of two answers: the shop doesn’t do it, or it would take several weeks. We had 4 days to go by the time we were calling.

To get the trailer registered, we were going to have to go before a judge in Texas, which would be made much more difficult by our relocation to the east coast. 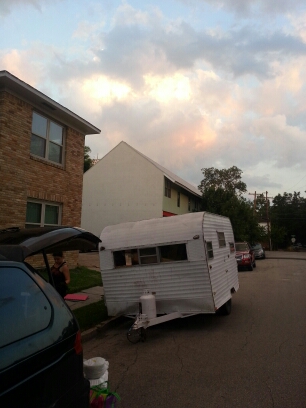 We decided to move forward, we were out of our apartment in time, packed up and ready to go. as we pulled away from the place we called home in Houston, it was clear that we would be unable to proceed – the car and trailer were riding far too low. Off to Greyhound to ship off half a dozen large boxes, frantic late night redistribution of weight, hitched up the trailer again, and we were on our way!

10 miles east on I-10, the car protested, we pulled over. White smoke seemed to be coming out of the engine. A call to AAA revealed that for some bizzare reason we could not get a tow until morning. a motel next door, we walked to it in the rain, checked in, and tried to amuse ourselves with the fact that there was a bottle cap left under the sheets and the lights didn’t work.

The next morning we got the car to the mechanic, but we had to leave the trailer at the gas station. We rented a uhaul to move the trailer, back to Greyhound, to ship more of our belongings ahead.

The mechanic called to let us know there was nothing at all wrong with the car, which was a relief considering how much we had recently invested in the car to make sure that was the case.

We returned the uhaul, but not before discovering that the trailer was shaking around quite a bit more than it had been when we started. By now it was getting to be late in the afternoon. We spent a bit of time in the uhaul parking lot, not knowing what to do, but we figured we were going to need a bike rack, and there was a sporting goods store next door.

We pulled into the next door plaza to also find a home depot. We set up in the home depot parking lot, figuring on doing some emergency repairs to stabilize the trailer. The security guard helpfully guided us to the overnight stay section of the parking lot, and pointed out the stealth van campers that would be our neighbors, reassuring us that we would be ok there. We placed some new wood into the base of the back of the trailer, causing it to now be firm and solid on the frame rather than floating. We stayed until around 11pm, when we finally called it a night, and moved to a motel across the highway. 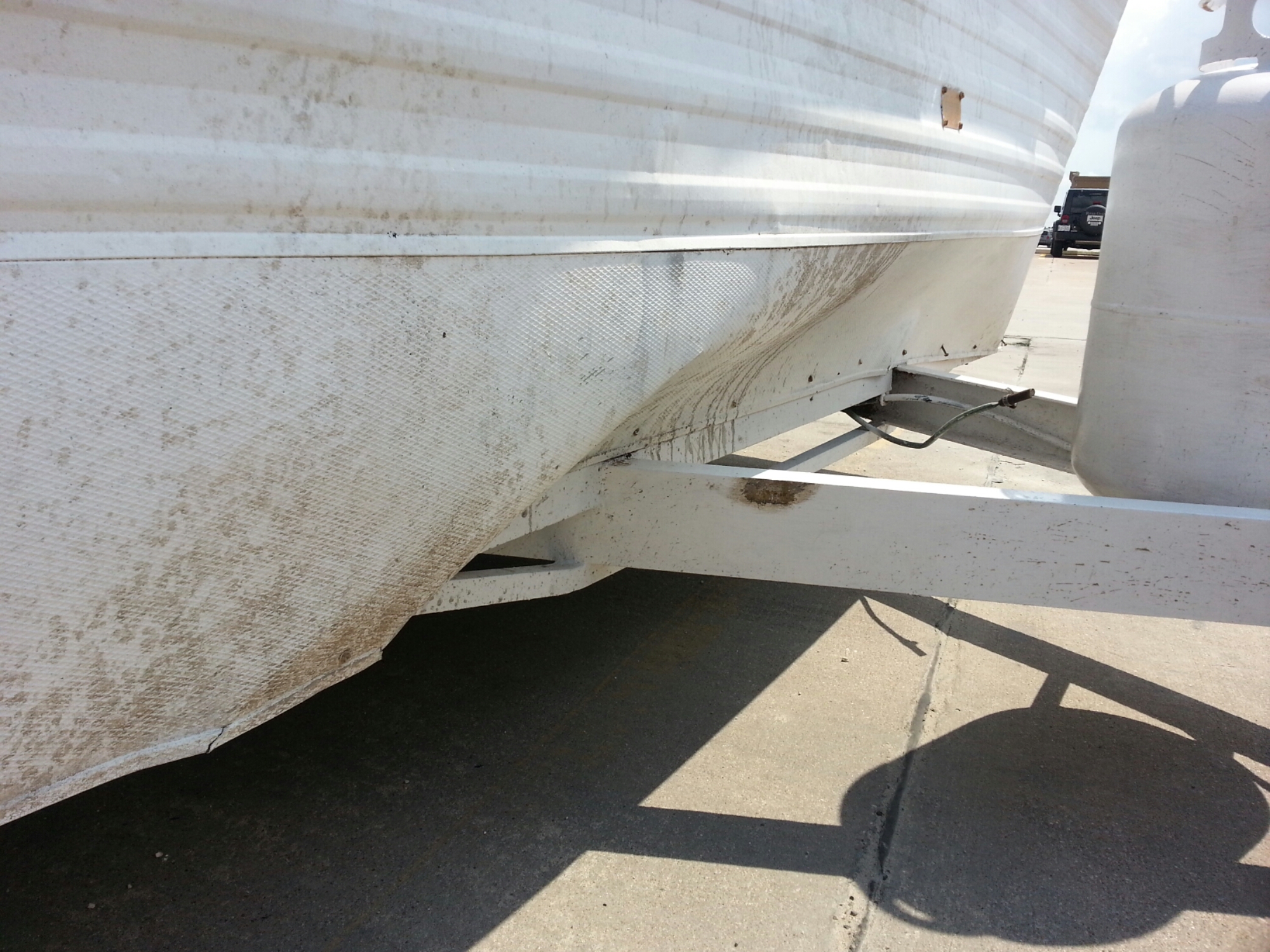 On the third day of this ordeal, we found the front of the trailer was buckling. We went back to the home depot with the intention of doing more emergency repairs, but it was clear to us that our minivan was simply riding too low to tow the trailer safely. To make matters worse, our tow hitch was so rusted it could be broken by hand in places.

We were going to have to abandon our trailer and pack into the minivan if we wanted to escape Houston with our funds (largely) intact. 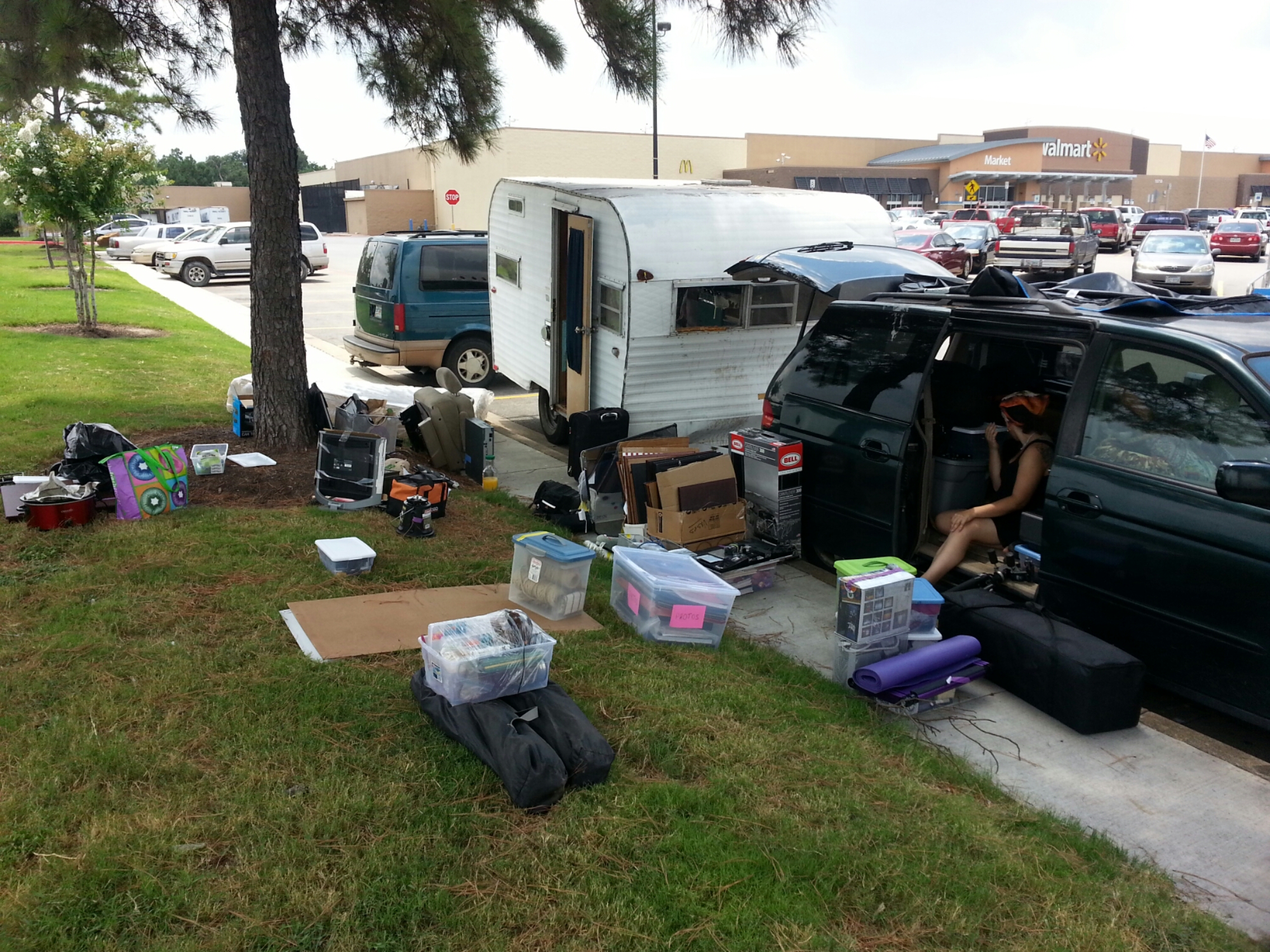 The next several hours were spent in the parking lot in a Walmart, under the one lonely tree we could find, moving all of the things we owned onto the lawn, and making difficult decisions about what we could leave behind. We found a scrap yard that would take the trailer, so we purchased a roof rack bag for the minivan and repacked the van.

By the time we finished packing, the minivan was riding just a bit too low to move the trailer, especially with the rusted tow hitch that could fall off at any minute. 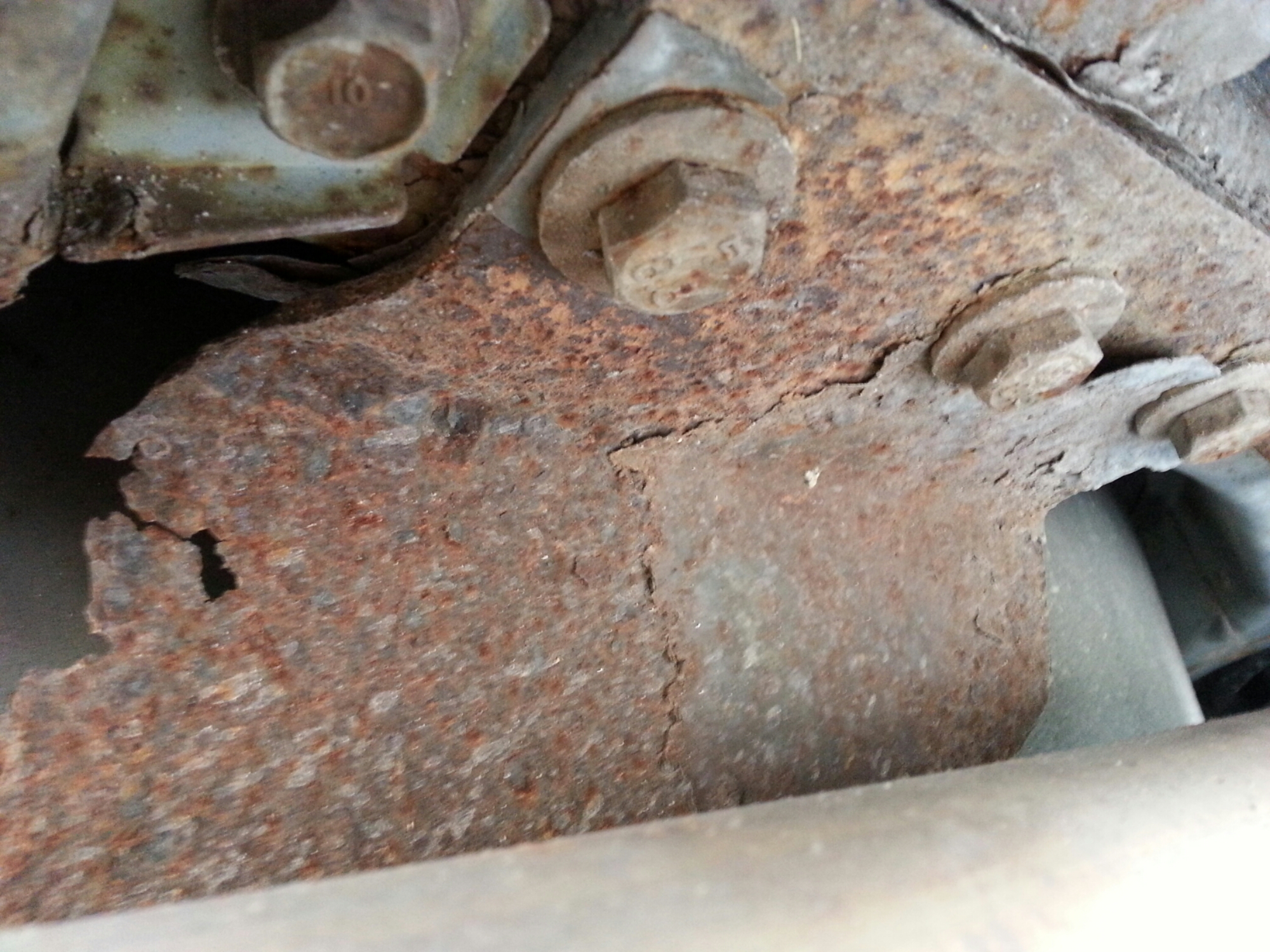 So we found ourselves calling around town to try to find a truck. We ended up finding the last 10 foot truck in town from uhaul, that they allowed us to rent because someone had put a lock on the back door, but we only needed it to tow. We drove to the junk yard, knowing that they were already closed, but desperate to get out of Houston before having to spend another night. 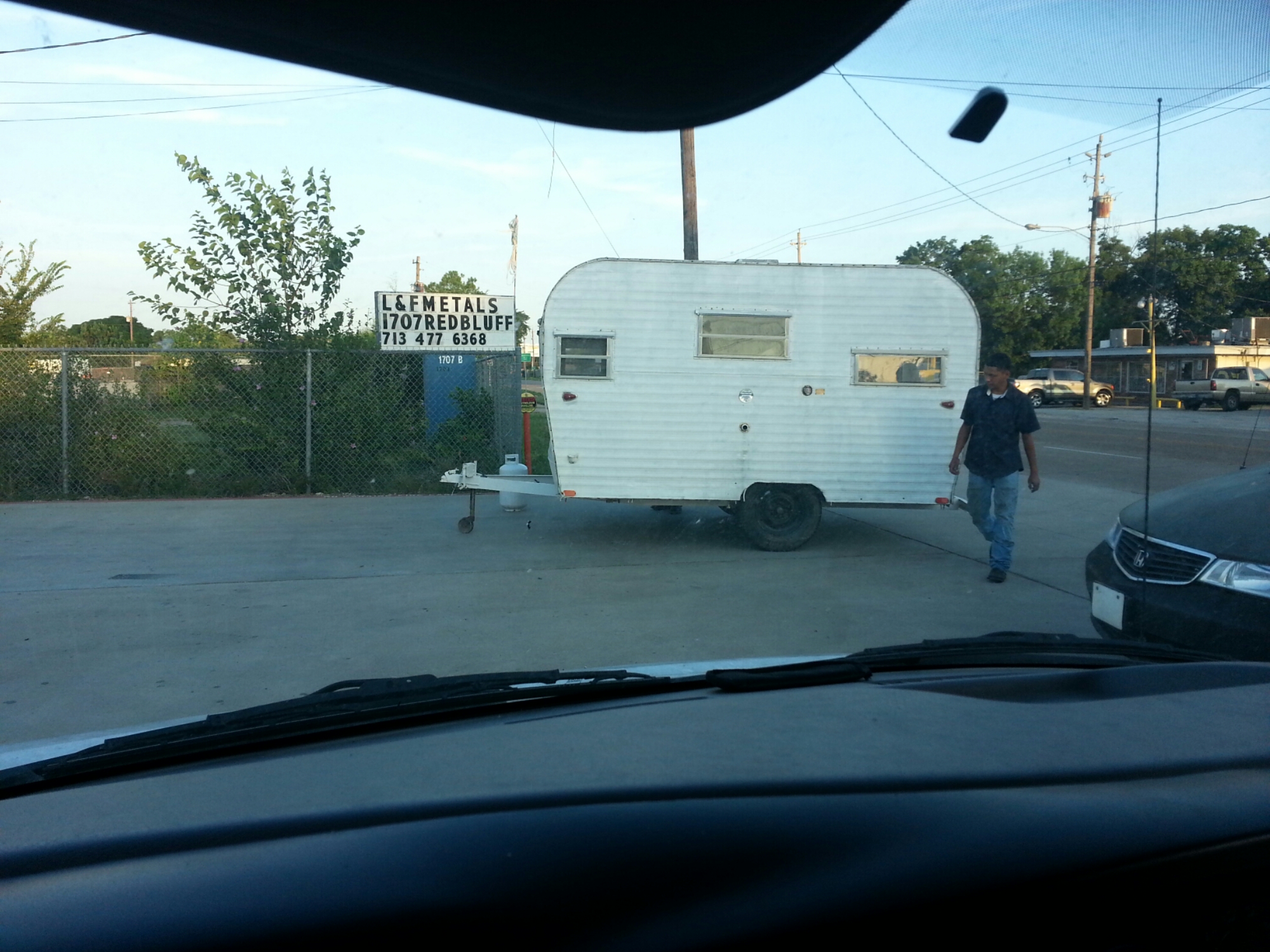 We made it to the junk yard, and we’re greeted by a locked gate and several dogs. We asked for help from the tire place next door. Somehow through communication with the a man and his son, we managed to get the ok to leave the trailer there. We were sad to have such a setback on our hopes and dreams, but we gained a lot of insight on what not to do.

Significant relief washed over us as we dropped off the uhaul, ate some Chinese food, and made it to Louisiana to spend the night. 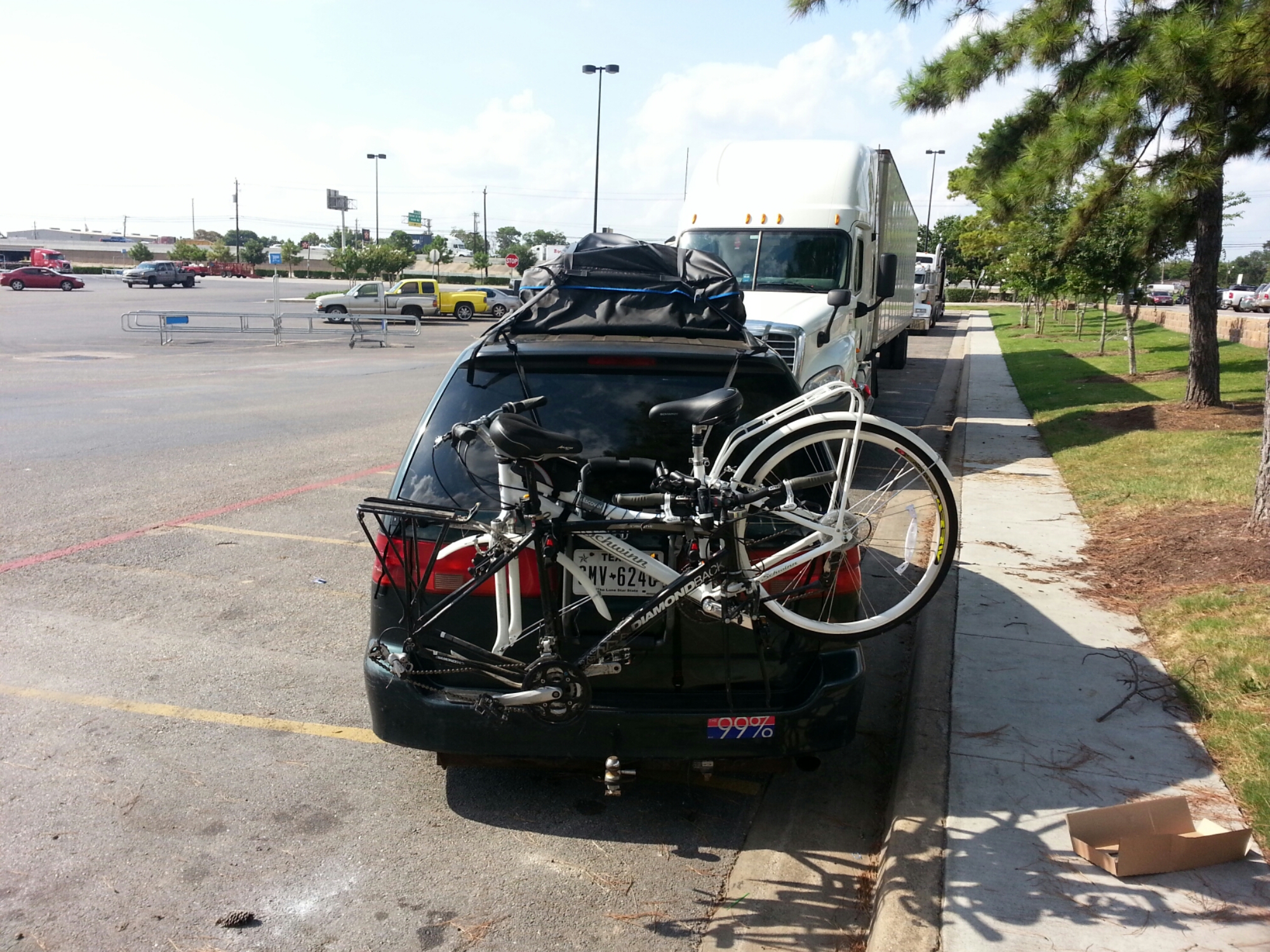 Through personalized workshops, we will help you build your website